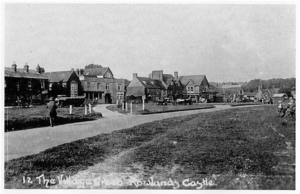 Castle Village Green c 1920, before it was consolidated from its original segments into the wide, uninterrupted expanse familiar today.

The Castle of Rowlands Castle once stood to the East of the present-day centre of the village. Its towers and battlements are known to have been in good repair in the twelfth century, when Henry II spent several days there in hunting and amusement.

The Castle is thought to have lasted until the mid-fourteenth century, and in the nineteenth century a report states “the remains of Rowlands Castle consists of two masses of wall which are about 10 feet thick with a fosse of considerable depth”.

The Parish of Rowlands Castle was formed in 1932 consisting of Blendworth Parish, Idsworth Parish (which had been attached to Chalton at one time) and parts of five other Parishes. One of these, Havant (Redhill), provided Rowlands Castle with a church, the Church of St. John, built in 1837 (registers date from 1841).

The ‘Castle Inn’ was in the possession of the Outen family for 200 years, and was said to have been the headquarters of a notorious gang of smugglers. 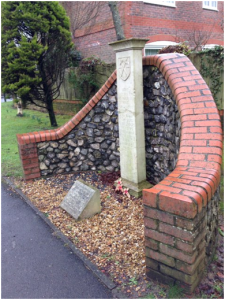 The current Idsworth House was built by the Jervoise-Clerk family in 1851, and owned by them until the early 1980s. For a short time, Countess Howe was a tenant. The original House was situated in what is now known as ‘Old Idsworth, but was dismantled when the railway was built across the grounds.

The ancient chapel of St. Hubert stands in the middle of a field, thought to be the site of a mediaeval village, on what was part of Idsworth Park. Parts of the chapel date from the twelfth century.

During World War 2, the proximity of its station meant Rowlands Castle was involved in accommodating the build-up of troops, munitions and equipment prior to D-Day. The King’s Stone on Manor Lodge Road marks the spot where King George VI stood on 22 May 1944 as the gathered troops paraded past before departing for D-Day. It is currently listed on the National Heritage List for England, see here for details.